Image of today cartography: Activities of students of geography and cartography

From May 6 to June 3 the Library of Geography of the Faculty of Science of the Charles University in cooperation with the Department of Applied Geoinformatics and Cartography hosted an exhibition called Image of today cartography, with the subtitle Activities of students of geography and cartography. The young cartographers presented original maps. The exhibition was advertised not only in a press release (see exhibition in the section on publications), published in a number of on-line periodicals, but also in the Czech radio ČRo 1 (Radiožurnál) and ČRo Leonardo which featured several interviews.

The exhibition included a section dedicated to searching for creativity and aesthetic dimension in cartographic works (see below). 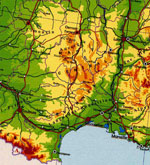 The GPS technology (global positioning system) has become a part of our everyday lives. The offer of maps on the Internet is also growing and nowadays it is a piece of cake to find an address on the Internet. In addition, historic and early maps are still favoured by the public. What is the link between this dynamic development and the past? It is cartography and a relatively new field geoinformatics. Both these fields are an extraordinary example of how new technologies can be united with older concepts and how the computers can help us to create user-friendly documents of pleasant graphics.

The Charles University educates the future cartographers and geoinformatists via the field of study called Geography and Cartography.  Here, they are taught subjects which introduce them to cartographic production as complexly as possible. They learn to perceive the world with the artist’s eye retaining the spatial context. The exhibition presented students´ works which were created during the subjects Thematic Cartography, Map Creation and Graphic Design and DTP in Cartography.

It enabled the visitor to take a look into the secrets of cartographic work creation, from the first concept to its realization together with a graphical designer. During their studies the students had the possibility to test all the advantages and disadvantages of team work which awaits them in their future practice in cartographic publishing companies. The exhibited maps of South-East Asia and Oceania were even proposed to become part of a joint geographical atlas of this area. The students also established “their” fictitious publishing companies, including their logos and graphic style.

The section dedicated to the possibilities of creativity in the current cartographic production was especially inventive.

The students´ task was to create a cartographic work using a well-known artistic style of the 19th or 20th centuries, or using a known artistic technique. The exhibited works showed that there were no limits to creativity. We could see for example a fictitious map of Tyrol from 1620 burnt on a common material, which was however quite untraditional in this context - oak veneer. This piece of work was very successful with visitors of the exhibition during the Art and Cartography international symposium (January/February 2008 in Vienna). Another interesting piece was a map of shopping centres manufactured from a shopping bag or a political world map cut out from small pieces of paper of different colours.

The cartographers have always strived to provide the society with information about the Earth in an illustrative and transparent way, via maps. This exhibition is, among others, a contribution to the World Information and Communication Society Day on May 17.

In the second part of the exhibition real creative expression of students could be seen. The output was created as a bonus, optional task in the subject of Thematic Cartography. The students’ task was again to handle any topic, either using an unconventional technique (e.g. painting - pencil, collage…) or following a traditional artistic style (impressionism, surrealism…), or possibly another unconventional solution. For more on creativity in cartography see section on map creativity.

The work Fictional map of the Tyrol from 1620 (see below) burnt onto oak veneer was part of this part of the exhibition, together with a Panoramic map of Mt. Everest drawn in chalk. Some photographs are available as part of the web album of the Picassa programme.

Fictional map of the Tyrol from 1620

Interestingly, the map was created taking into account the real surroundings in which the game itself took place – the area around the Tyrol log cabin near the village of Slatiňany, near the city of Pardubice, Czech Republic. However, to support the fictional atmosphere in the area where the players looked for a treasure, i.e. the presence of the Tyrol, the names were given in German.

Currently, artificial materials are commonly used when creating cartographic works. A growing number of maps are used only in their digital form. On this exhibition they are displayed on plastic or metal screens.
Nevertheless, this map is made of the most traditional material ever (possibly with the exception of stone) – of wood. The drawing itself has been created by the easiest method – wood burning. The map has been burnt onto oak veneer using a special burning needle with several holders.
The nature of the game (the map was to be found gradually) required that it was divided into altogether 48 pieces (6 pieces wide and 8 pieces high). 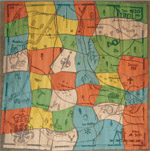 As an inspiration for some of the composition elements (especially the coat of arms in the lower-left corner and the graphic scale in the lower-right corner) we made use of the Helwig´s map of Silesia from 1561. Pictures scattered around the map should evoke the typical characteristics of the local surroundings.
The "thematic" content of the map is a treasure hunt starting at the Tyrol log cabin. The treasure is marked with a cross.